I am always amazed and inspired by the stories I hear from students about their incredible transformations through yoga. It makes me so excited to know that this practice changes other people too and not just me. And what really blows my mind is that it isn’t age specific.

Of course, we hear that yoga has all this great benefits for everyone– improving posture, expanding concentration, reducing stress, increasing strength and stability, blah, blah, blah– but to know and see that it’s not just a bunch of marketing bullshit is the best reward for me.

Here’s the example that I’ve been tripping over for a few days:

My 83 year old student Max, whom you met earlier in my 108 days, practices with me privately at his home two to three days a week. In the last eight months, we’ve added more pranayama exercises (translated as ‘breathing exercises’) to our 90 minute regime. I wanted to see if this would have a significant impact on Max’s normal breath function, because Max suffered a bad pneumonia several years ago and was left with a hole in his left lung. Obviously, this alone severely impacts the dept of his breath. Plus, he is in his eighties.

To keep track of his health and breath capacity, Max sees a pulmonologist at least once a year for a pulmonary function test. Using a machine called a spirometer, the test is designed to determine the ‘flow volume curve’ of the patient (or the volume of breath inhaled and exhaled). This test last about an hour and at the end an average is taken. At Max’s worst, his test scores indicated that his lung volume was at 65– a healthy adult would score about 100 on this kind of testing. Last year, Max was up to 85. This year, his doctor wanted to him to retake the test because his result was 135! Apparently, his doctor could believe an 83 year old could have such a dramatic improvement in just one year. Incredible. He told me his was elated and immediately called all of his family members. I’m so proud of him.

Breathing is the most important aspect of life. The more efficiently we inhale and exhale, the better everything operates. I often tell my students that “Breath is medicine.” When we are too deep in a pose and pushing too hard, we restrict our breathing and our activity becomes something other than yoga. Not everyone cares about this, but I do. Without breath there is no lifeforce in the pose and without this, there is no yoga.

Here’s a link to an article you might enjoy. My mom sent it to me. It’s about another 83-year-old yogi in Australia, dubbed “Yoga Supergran”, who can still do mayurasana and teaches 11 yoga classes a week. ROCK ON! 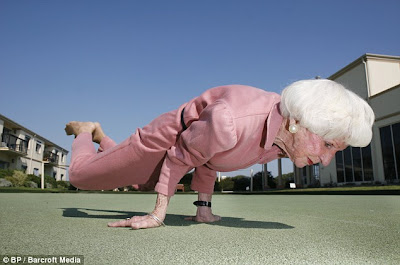 ARTICLE: “The yoga supergran who can still assume the lotus position… at the age of 83”