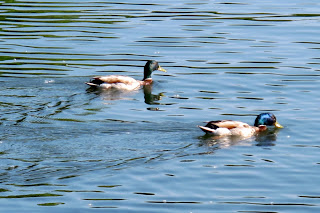 It was a glorious summer solstice!

For the fifth consecutive year, I am running my Sunrise Yoga by the Lake program this week and next. We meet at 6:00am on the pier in Pointe Claire Village near my studio, and begin with a 30 minute group meditation. The pier faces East and it’s so heavenly. We hear a variety of birds and the water gently lapping the shore. It’s not exactly the beach, but it kinda feels like we’re on the ocean. The group then practices asana at their own pace. Mostly, they are my teacher training students, who are all working on the Ashtanga Primary Series, but there are a few other students that come as well. It’s nice for them to have the opportunity to do a self-guided practice, as it builds their confidence and allows them to work on postures we might not get to in a group class. I am, of course, on hand to help with adjustments and answer questions. 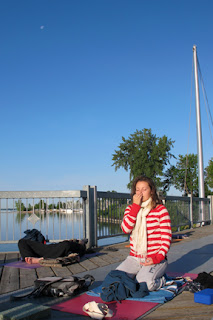 Seeing as it is the Summer Solstice (and my grandmother’s birthday and my half-birthday!), we decided to do 108 Sun Salutations. It was amazing. A beautiful flow. I love my teacher training students so much. They are such a great group of super enthusiastic nut balls and we have a lot of fun together. The sun salutations were their idea, but I was in to it as well. So we meditated first, using our personal mantras, which were presented to us individually in a ritual given by Chopra Center teacher, Sheila Southon, who taught the group the Chopra Primordial Sound Meditation course this spring. Those who didn’t yet receive their personal incantation, followed the mantra of the universal breath “So Hum“– sooooooo on the inhale and hummmmm on the exhale. It’s a very relaxing practice, which I highly recommend.

Our Sun Salutations were done together, but in silence. Only the breath moved us. We did regular surya namaskar A, holding downward dog every sixth salutation. So awesome to practice outside at dawn on this special day. I must admit, I’ve been nostalgic about my 108 practices from last year. Although I doubt I could ever do 108 days of 108 sun salutations again, I have such fond memories of that time. Last year on this day, my mom and I joined the yogis from the Naada Yoga studio at the lookout on Mount Royal for a sunrise practice, which was also blissful. 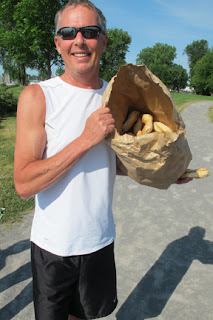 After yoga, we have a picnic breakfast, which is such a huge treat. My student Bruce says that the fresh bagels I bring each morning from St Viateur are the reasons he joined the teacher training program!

I know it seems crazy to get up so early (4:48am to be exact) and practice, but as I’ve said a thousand times (or so it feels) this week, it’s a lot easier to get up for yoga and meditation than it is to go to work. I suggest trying a week of consecutive practices at 6am. The benefits are enormous, as one practice builds upon the last.

Now I must go to bed, for early mornings require early nights! 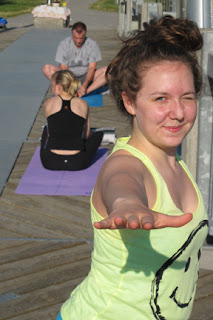 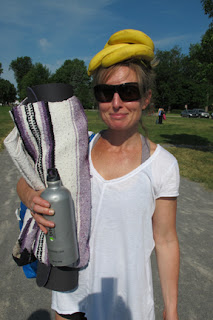